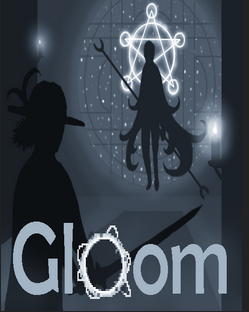 Gloom is a side-scrolling Roguelike game, developed by Hunchback Studio (which means the developer himself, Aleksi Sirvio, and the composer, Valtteri Hanhijoki), and released on Steam in April 2017.
Advertisement:

In it, you are a nameless dreamer, trying to make sense of the mystery that is the Common Dream. You know that deliverance lies within the lost pages of the Necronomicon and in the enigmatic Abyss deep within the Dream. To reach these, however, you must fight through hordes of insane dreamers and eldritch beings, as well as discover your past and the occult history of the Common Dream.

Has nothing to do with the tabletop game nor the Amiga's Doom clone of the same name.

Sometimes before I fall asleep,
A fear begins to creep.
At this time I count no sheep,
Instead I start to weep.
To flee I need a Silver Key,
But sadly while I am dreaming.
The parasites will gnaw on me,
Until I wake up screaming.
I sincerely hope you are making progress.
Why must you attack us, Dreamer? Nothing awaits you here. You will simply die over and over again, until you give up.
Hey dreamer, wanna hear a joke?
How many dreamers does it take to change a lightbulb in the Abyss?
It doesn't matter, since none of them will ever make it there anyway.