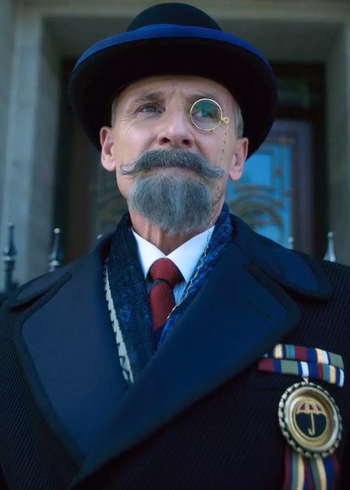 Start with one cup(pa) tea. Mix in a hearty helping of posh, formal, excessively polite-sounding Received Pronunciation accent, or at least how you think it is pronounced. No one (except those pesky British people) will notice. Add some Stock British Phrases for seasoning, wot, wot. Throw it all in a top hat and stir with a monocle over low heat for the 1000+ years in the history of The British Empire. Turn it out carefully, give him a name like "Sir Nigel Featherstonehaugh-Smythe",note "Featherstonehaugh" pronounced "Fanshawe", or possibly "Thomas", add a fancy prefix or suffix such as "the (Most) Honourable", "III" or "Esquire", and Bob's your uncle, you have yourself the Britishiest British man to ever "cheerio" his way into the media-viewing-public's home. And no one (except those pesky British people) will be any the wiser that you're mixing dialectal phrases willy-nilly or throwing British slang around like Frisbees.

Such characters are generally English in style, since the defining characteristics are not usually seen as typical of the Scots, Welsh or Northern Irish.

The Quintessential British Gentleman is a stock character commonly found in decidedly not-so-British works, who encapsulates everything that non-Brits (most commonly Americans) think of when they think of that funny little island across the pond. Much like the Eaglelander is a Flanderized American, this chap is the Flanderized Brit. Common characteristics include:

He's not always a product of Critical Research Failure. Sometimes, just as an Eaglelander is a gentle poking-fun-at of Americans, so too might this fellow be a humorous, good-natured jab at the English (because this stereotype is, more precisely speaking, English rather than British) — and done well, of course, even the Brits find it funny. In fact, many of the works listed were created by Britons, casually playing with their own stereotypes. (Britons, generally speaking, are good at Self-Deprecation.) Some Britons really do act like this, if not in everyday life, then at least recreationally. Because it's funny.

Compare with that Hawaiian-Shirted Tourist from Eagleland, and that bush-hatted fellow from the Land Down Under. By the way, has nothing to do with the Lord British Postulate, but plenty to do with Stiff Upper Lip. The Q.B.G is probably helpless without The Jeeves. See also the Gentleman Snarker, which is what the Quintessential British Gentleman probably was in his wild youth.

Real British Gentlemanly behaviour is more subtle than speech or dress, involving the virtues of hospitality, rationality and temperance, the avoidance of irrational extremes, devotion to 'things held dear', rebellion against corruption, and courageous composure in the face of adversity. (However, some of these - like extreme composure - are sometimes seen in trope form). The fact that old-school British upper-class men were expected to be athletic while young, and highly competitive or even domineering, is usually left out of fictional descriptions of the type. Female examples are likely to be an English Rose.