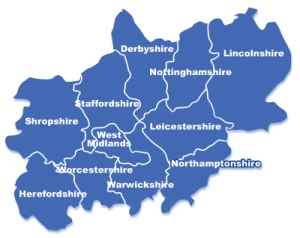 The Midlands is between Oop North and London. Land of The Free, Home of The Brummies. note  Though of course, as is usual in Britain, Midlanders from outside Birmingham will get very annoyed if called a Brummie.

It broadly corresponds to the old Kingdom of Mercia (the dialect influenced J. R. R. Tolkien) and is split by the UK government into The West Midlands and East Midlands regions, this split is currently only used for statistical purposez and for TV news coverage.

The Midlands is usually considered to contain the historic counties of Staffordshire, Worcestershire, Herefordshire, Shropshire, Warwickshire, Northamptonshire, Rutland, Leicestershire, Nottinghamshire and Derbyshire. Oxfordshire, Bedfordshire, Gloucestershire and Huntingdonshire are occasionally considered part of the Midlands but fall outside the regions of the West Midlands or the East Midlands and are more often considered parts of The West Country, East Anglia or the Home Counties. Lincolnshire is part of the East Midlands region but its northern part falls inside the Yorkshire and Humber region and the county is often excluded from being part of the Midlands because of its large coastline. Opinion is divided as to whether most of Cheshire, (outside its northern industrial belt and the bits in the orbit of Liverpool or Manchester) counts as Oop North or Midlands. Similarly, the northern part of Derbyshire, the spur pointing up into the Pennines and bordering Lancashire and Yorkshire, is often considered as the southern boundary of Oop North.

The largest cities of the Midlands include Birmingham, Coventry, Stoke-on-Trent, Nottingham, Derby and Leicester. Somewhat deprived in places, Birmingham and Nottingham currently have a rather bad reputation for gun crime. Coventry, meanwhile, has been named the most dangerous city in the UK

and the seventh most dangerous in Europe

The cities of the Midlands are noted for having a larger than usual percentage of ethnic minorities. In the city of Leicester over 50% of the population is an ethnic minority, and Leicestershire also hosts the largest Diwali celebration (the Festival of Light) outside of India. Special mention should go to Belgrave Road in Leicester, commonly known as the Golden Mile for its absurdly high number of gold merchants, jewellery stores, and banks (it's literally door-to-door), with every business run or owned by an ethnic minority. Leicestershire is notoriously proud of its multicultural society and while racism is of course always a bad thing, there it becomes completely unacceptable, considered even lower than knife and drug crime - and rarer.

Midlanders are often thought of as being stupid, possibly due to most accents being non-rhotic with vowels so sloppy that they can successfully dirty up any nearby consonants too. This results in the Midlands Drawl, which involves either taking as long as you can to say as little as you can, or saying as much as you can as slowly as you can. The Black Country accent makes people assume 'thickie' whereas a Staffordshire accent is more generic. An East Midlands accent actually sounds much like Oop North to the untrained ear.

By a quirk of geography, the Midlands are actually slanted so "the North West" region is actually further south than the centre of the East Midlands.note Debate persists as to whether most of Cheshire, outside its northern industrialised belt, properly belongs in the Midlands. Parts of northern Derbyshire, especially Buxton and Glossop, are considered to be just about part of the north. Refer to Oop North for further details.