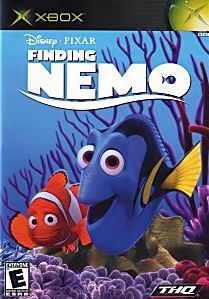 Finding Nemo is a Licensed Game based on the Pixar film of the same name, developed by Traveller's Tales (console version), Vicarious Visions (GameBoy Advance version), and KnowWonder (PC version). The game follows the events of the movie (barring a few deviations) and uses clips from the film in place of cutscenes.

It was released by THQ on the Game Boy Advance, PlayStation 2, Xbox and Nintendo Gamecube on Spring 2003.

Minor cast members including Willem Dafoe and Allison Janney have reprised their roles from the game.