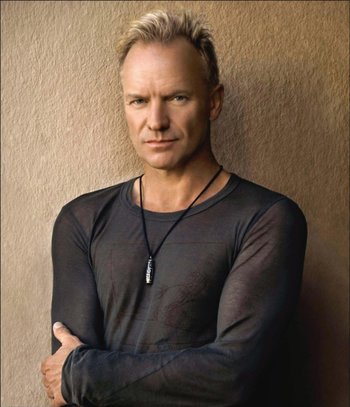 That's not Sting! That's a picture of Sti—
—wait, wrong Sting.
"Sting. Sting would be another person who's a hero. The music he's created over the years, I don't really listen to it. But the fact that he's making it, I respect that."
— Hansel, Zoolander
Advertisement:

Gordon Matthew Thomas Sumner CBE (born 2 October 1951), better known as Sting, is an English singer-songwriter and sometime actor who launched a successful solo career after a short but spectacular run fronting The Police. Without Stewart Copeland's influence his sound became mellower, and he became a staple of Adult Contemporary radio stations, while still dabbling in a variety of genres.

Some of his most popular songs include "Fields of Gold", "If You Love Somebody Set Them Free", "Fortress Around Your Heart", "We'll Be Together", "All This Time", and "If I Ever Lose My Faith In You". "Desert Rose", released as a single in 2000, was his last hit in the U.S., though he's enjoyed somewhat greater longevity in Europe.

His son, Joe Sumner, followed in his footsteps, becoming the lead vocalist and bassist for the group Fiction Plane.

Not to be confused with the wrestler or with the other kind of Musical Sting.