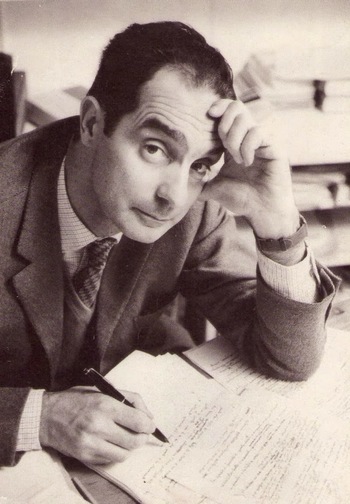 "Our civilization has plenty of records of everyday life; the movies, the television, the papers...I think literature should give something more — a fantastic interpretation of reality."
— Italo Calvino
Advertisement:

Italo Calvino (1923-1985) is one of the most important authors of Italian literature. His works are famous for being Genre-Busting, mixing low-and-high culture, real science with fantasy, history and contemporary life. They are exemplars of Postmodernism.

Born in Cuba, Calvino grew up in San Remo on the Ligurian coast of Italy. His parents were both scientists and socialists, and this greatly affected Italo's upbringing in Fascist Italy. He studied at a Protestant school in Catholic Italy and later he and his parents joined La Résistance. After the war, Calvino long fascinated with storytelling and books, embarked on a career as a journalist and novelist.

His early works were in the highly realist style that was popular in post-war Italy but by the end of the 50s, he discovered his voice when he published a collection called Italian Folktales that became a best-seller. Alongside that he wrote The Cloven Viscount which along with The Baron in the Trees and The Non-Existent Knight made Calvino a representative of Postmodernism and meta-fiction. What made Calvino different was his fondness for shifting styles and never repeating himself. His works became celebrated for their devilishly clever conceits and its mix of humor and fantasy. His later works became even more complex creations, most notably Invisible Cities and the highly unusual If on a Winter's Night, a Traveler. He travelled widely and spent much time in France, England and America, forming friendships with such disparate figures as Gore Vidal and Roland Barthes. His works were widely read and translated in several different languages and he became a national treasure in Italy and his death was publicly mourned and attended by thousands.

Gore Vidal, famous Caustic Critic, made an exception for Calvino and called him "the only great writer of my time" and his works have influenced several writers and artists, including Umberto Eco, Neil Gaiman to Salman Rushdie as well as Jonathan Blow who cited Invisible Cities as an influence for Braid.