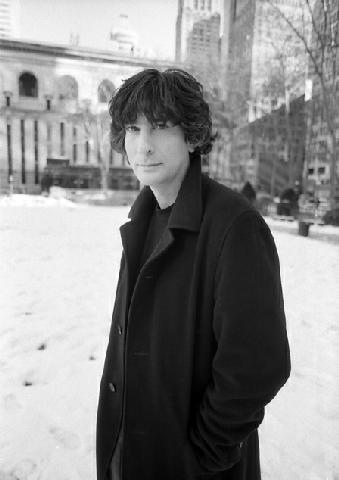 Neil "Scary Trousers" Gaiman, master of modern horror.note Nickname bestowed by Alan Moore
"The world always seems brighter when you've just made something that wasn't there before."
Advertisement:

Neil Richard Mackinnon Gaiman (born 10 November 1960) is a contemporary British writer of stories known for his recurring work in the Urban Fantasy genre and extensive use of mythological references and symbolism, often times in "modern" settings. Stephen King thinks he may well be the greatest storyteller alive today.

Some of Gaiman's most famous works include the renowned The Sandman (1989) comic series for DC Comics under their Vertigo imprint, which was the only work in its medium to win a World Fantasy Award for Best Short Story.note To prevent it happening again, they changed the rules so that comic books had to be relegated to their own special category, and couldn't be judged alongside prose works. His novels Stardust and Coraline have been made into movies, and American Gods and Good Omens have been made into streaming miniseries. He's also written scripts for other projects, such as MirrorMask by Dave McKean and the Neverwhere TV series. In addition, he worked on the translated script of Princess Mononoke. His young adult work The Graveyard Book became the first book to win both the Newbery Medal and the Carnegie Medal. He also wrote two episodes for Doctor Who, "The Doctor's Wife" in Series 6 and "Nightmare in Silver" in Series 7.

Gaiman married Amanda Palmer of The Dresden Dolls in 2011; they have one son together. The couple announced their divorce

and a Tumblr blog

, as well as a more traditional blog

(it was originally created to document his promotion tour for American Gods back in 2001, and it took off from there). He's also been known to dispense writing advice to fans (often via Tumblr). He is also a part-time professor at Bard College.

During the COVID-19 Pandemic, when LeVar Burton was looking for material to read during his live-stream, Neil granted "blanket permission"

for him and anyone else to use his stories for their shows.

Tropes of which Neil Gaiman is an example: