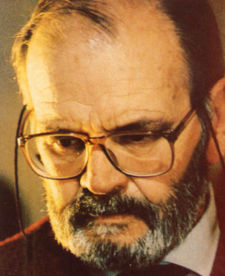 Lucio Fulci (17 June 1927 – 13 March 1996) was an Italian screenwriter and director, best known for splattery gialli and horror films (though he also made westerns and comedies). His films seldom pass up an excuse for gore, and the effects are consistently over-the-top — sometimes horrifyingly convincing, sometimes amusingly fake, but always extreme. His films are driven by theme and visual style rather than coherent plot; they tend to be deeply pessimistic, and propelled toward nihilistic Downer Endings. Compare Dario Argento.

Other films he made include: