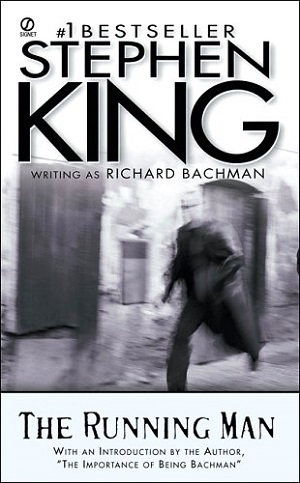 "In the year 2025, the best men don't run for president, they run for their lives..."
Advertisement:

The year is 2025 (the film version is set in 2019). Ben Richards desperately requires money to get medicine for his ill daughter, Cathy. To stop his wife Sheila from continuing to prostitute herself to pay the bills, Richards turns to the state-sponsored Games Network, which runs several TV game shows that put contestants at risk of severe injury or death. Contestants win money by surviving challenges such as Treadmill to Bucks

, where a person with a heart or respiratory condition runs on a treadmill while answering trivia questions, or the self-explanatory Swim the Crocodiles. After an extensive screening process, Richards is selected for the country's most popular and dangerous game, The Running Man.

After being declared a public enemy on the show, Richards is given $4,800 cash and a pocket video camera and turned loose. His family will win $100 for every hour he stays alive; if he can survive for 30 days, he wins the grand prize of $1 billion. He also gets a 12-hour head start before the network sends out a team of trackers known as "Hunters" to find and kill him. He can travel anywhere in the world, and each day he must videotape two messages and courier them to the TV show. Without these videotaped messages, he loses the prize money but the Hunters will continue their search. Despite the producer's claims to the contrary, as soon as the Network receives a videotaped message, the Hunters immediately know from the postmark the runner's approximate location. Viewers can earn cash rewards by calling the network with tips on his whereabouts. To date, there have been no survivors - and the producer frankly states that he never expects there to be any. The survival record is eight days and five hours.

The story, written by Stephen King under his Pen Name of "Richard Bachman", is better known for its 1987 film version with Arnold Schwarzenegger and Richard Dawson, which turned the story into one of a Blood Sport played by condemned criminals, and Richards' reason for entering the contest changes — he was framed for a massacre that he was actually trying to stop. In 2021 it has been reported that Edgar Wright is going to helm a new movie adaptation that will be Truer to the Text. It will be from Paramount Pictures which have perviously got the rights to the original version.

Not to be confused with Running Man, the South Korean variety show. Or The Runner

, an evidently unrelated 2016 series with a very similar premise (though presumably with nobody dying).