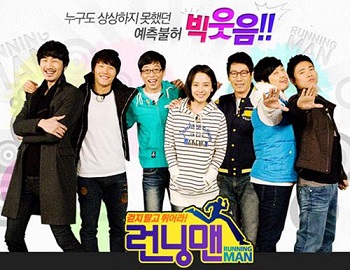 From left to right: The Giraffe, The Tiger, The Grasshopper, The Cat, The Impala, The Penguin, The Monkey
Advertisement:

Running Man is a popular South Korean Variety show focused on a main cast of seven celebrities who compete in various games and races throughout a number of locations in Korea. The show became famous with its signature set up of velcro-ed nametags of the players on their backs and ripping them off in the final game to ‘oust’ other players.

The earlier episodes featured the popular ‘hide and seek’ game where half the group became the mission team (with some special task to do) and the chasing team (who must rip the mission team’s nametags in order to win). The show has since developed from locking the group in an empty building overnight into a race around the city with minor games at different places that eventually lead up to a nametag-ripping game among the teams or individual members at the end. The show is responsible for creating the new sub-genre of ‘urban variety’ for its unique structure. While the show's action-oriented format helped the show earn early fame, the camaraderie and chemistry of the cast is the main reason for its continued popularity.

In June 24 2017, an animated version of the same name was announced. After 10 months, the Running Man animated series has been aired in Korea, and after a while, Asia on Cartoon Network.

Not to be confused with The Running Man.