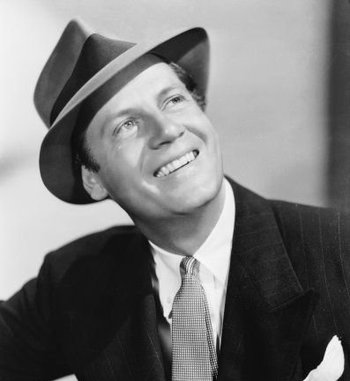 "People say I'm a one-note actor, but the way I figure it, those other guys are just looking for the right note."
Advertisement:

Joel Albert McCrea (November 5, 1905 – October 20, 1990) was an American actor best known for his film appearances during The Pre-Code Era and The Golden Age of Hollywood.

Although he was often cast as a Mr. Fanservice character, with enough famous shirtless scenes to rival Paul Newman, McCrea appeared in a wide variety of film genres over his 50-year career, from an Alfred Hitchcock thriller to Western films and romantic comedies. He commonly co-starred in films with Barbara Stanwyck (six) and Miriam Hopkins (five), but would likely be best recognized today for Sullivan's Travels with Veronica Lake.

McCrea was said to have once claimed that he saw acting as a "hobby" of his, whereas he mostly owned ranches and bought many properties around California, becoming a multi-millionaire in the 1940s because of it, as well as his acting career. He was also Happily Married for over 50 years to fellow actress Francis Dee, and the two of them had three sons— one of whom, Jody, became an actor too.

He died of pneumonia at the age of 84.