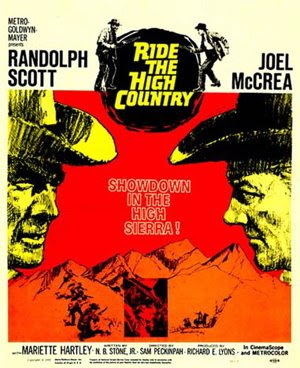 "I just want to enter my house justified."
Advertisement:

A 1962 Western film, created when the Hollywood studio system was in decline.

Two former lawmen, Gil Westrum (Randolph Scott) and Steve Judd (Joel McCrea), are escorting a shipment of gold through the Sierra Nevadas. Along on the trip are Heck Longtree (Ron Starr), their brash young associate, and Elsa Knudsen (Mariette Hartley), a pretty young woman who joins the men to escape her domineering religious father Joshua (R. G. Armstrong) and marry her fiancé Billy Hammond (James Drury), who happens to be at the same mining camp where Westrum and Judd are picking up the gold.

But betrayal is just around the corner.

Box-office glory didn't happen for this film on its initial release, but modern cinephiles recognize it as an early triumph in the career of its director Sam Peckinpah, with some even ranking it higher than The Wild Bunch. It's also notable as the final film of Randolph Scott's career and the penultimate one for Joel McCrea.