Film / The More the Merrier 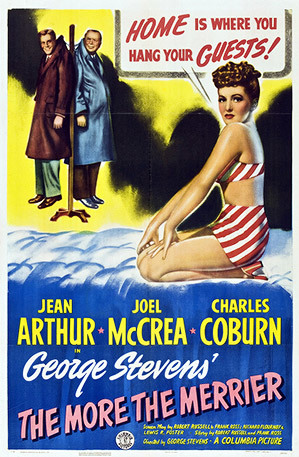 A retired millionaire, Benjamin Dingle (Coburn), finds himself with nowhere to stay during the wartime housing shortage in Washington, D.C. Somehow, he weasels his way into sharing an apartment with Connie Milligan (Arthur), a spunky, engaged girl. Various hijinks ensue, especially when Dingle decides to play cupid with Connie Milligan and Joe Carter (McCrea), the man he rents his rented room to without letting Milligan know (yes, super screwbally). As per usual in a screwball comedy, all ends well.

Nominated for several Academy Awards, with Charles Coburn winning for Best Supporting Actor for his role.

Remade in 1966 as Walk, Don't Run, starring Cary Grant in his last film role and changing the setting to Tokyo during the 1964 Summer Olympics. Compare Government Girl, another 1943 film about overcrowding and exploding wartime bureaucracy in Washington, DC.