Film / Stars in My Crown 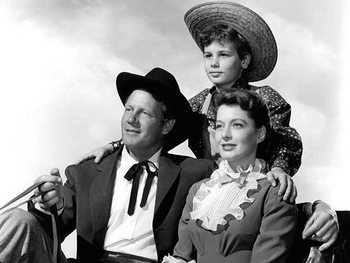 Stars in My Crown is a 1950 Western drama film directed by Jacques Tourneur, adapted by Joe David Brown and Margaret Fitts from Brown's own novel of the same name.

The setting is the little town of Walesburg, Tennessee, not long after the end of The American Civil War. War veteran Josiah Gray (Joel McCrea) comes back home to Walesburg and establishes himself as the town preacher. He marries a townswoman named Harriet Gray (Ellen Drew), who is looking after her orphaned nephew John (Dean Stockwell). John worships his adoptive father.

Two sources of tension roil the little town. Uncle Famous (Juano Hernandez), a black man and freed slave, owns a little plot of land by the river. No one seems to think that this is a problem until the local mica mine runs into Uncle Famous's property. When Famous refuses to sell, things get ugly. The second source of tension is the town doctor, Daniel Harris (James Mitchell). Dr. Harris thinks little of Josiah's Bible-thumping ways, which doesn't bother Rev. Gray very much. But when the town is struck by a typhoid epidemic, Dr. Harris blames Josiah for spreading the illness around through his bedside visits.

Amanda Blake stars as Miss Faith Samuels the curvaceous schoolteacher, and James Arness has a bit part as one of the villagers. Five years later Blake and Arness starred in one of the longest Long-Runners in American TV: Gunsmoke.