Film / Anne of the Indies 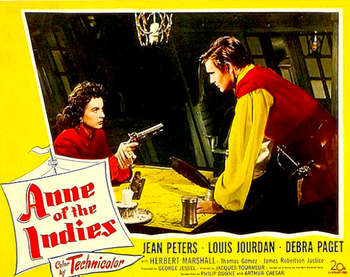 Anne of the Indies is a 1951 Technicolor adventure film made by 20th Century Fox. It was directed by Jacques Tourneur and produced by George Jessel. The film stars Jean Peters and Louis Jourdan, with Debra Paget, Herbert Marshall, Thomas Gomez and James Robertson Justice.

In order to recover his ship impounded by the British, former pirate captain LaRochelle agrees to spy on the notorious Caribbean Sea pirates Blackbeard and Anne Providence. Anne Providence, an especially fierce and passionate pirate captain, falls in love with LaRochelle, not knowing that he's already engaged to another woman and is mainly seducing her so that he can gain evidence for his superiors. Discovery of this treachery will only make Anne Providence unleash her fierce anger and great capacity for revenge.

Anne of the Indies contains examples of: