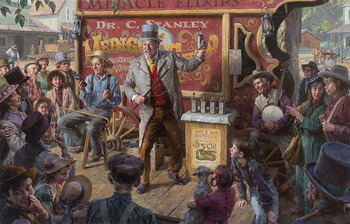 A traveling wagon show that presented various entertainments between pitches for miracle medications or other products. They were most common in the Nineteenth Century, moving from town to town in the Midwest, South and Western United States.

These productions were usually sponsored by some sort of elixir or panacea, or "snake oil" to critics, that purportedly would cure a wide variety of ills. In addition to a Snake Oil Salesman, common acts included freak shows, stage magic, musicians, stand-up comedy and flea circuses. In many ways, the Medicine Show was the direct ancestor of commercial radio and television shows, free entertainment interrupted at regular intervals by advertisements.

Naturally, the visit of a medicine show was a highlight of the year for many isolated communities, and a certain number of sales were just made in an effort to get the wagon to come back the next year. (Others were based on the rather heavy alcohol content of most snake oil remedies.) As communications and entertainment options advanced and new truth in advertising laws were passed, the medicine shows dwindled away, finally passing away in 1951 with the end of the Hadacol Caravan in scandal.

Medicine shows sometimes appear in stories about The Wild West and similar areas of the time period—often there will be a comical bit where a shill in the crowd buys the snake oil and pretends to be cured of whatever ails him, but then must vomit up the foul stuff or otherwise dispose of the unswallowed medicine. Many fictional depictions will have the townsfolk being extremely gullible about the Snake Oil Salesman's pitch and the protagonist being the only one who sees through the deception. For the wagon itself check out Mobile Kiosk.

Not to be confused with shows about medicine.