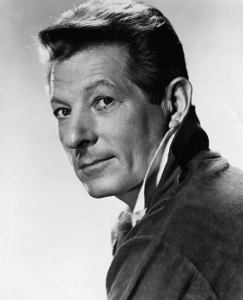 "Life is a great big canvas; throw all the paint you can at it."
Advertisement:

Danny Kaye (Real name: David Daniel Kaminsky; January 18, 1911 (Or 1913) – March 3, 1987), was a comedian, dancer, singer and actor in The Golden Age of Hollywood. He specialized in physical comedy, pantomime and rapid-fire delivery of often nonsensical patter.

He was born David Daniel Kaminski on January 18, 1911, in Brooklyn, New York. He started his show business career in vaudeville, branching out later into film, Broadway, radio and television, achieving considerable success in each medium. His variety show on CBS won four Emmys and a Peabody award.

Kaye was also a philanthropist. He became the first ambassador-at-large of UNICEF in the 1950s. Kaye also was the leader of the original ownership group of Major League Baseball's Seattle Mariners (yes, those Mariners), though his group would sell out in 1980.

On March 3, 1987, Kaye passed away at the age of 76. The cause of death was heart failure, as well as complications from Hepatitis C, which he had contracted a few weeks before his death.