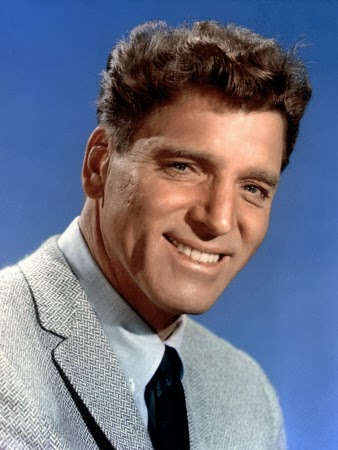 "I always try to improve, to find new ways of expressing myself, to keep looking for truth and originality."
Advertisement:

Burton Stephen Lancaster (November 2, 1913 – October 20, 1994) was an American actor, one of Hollywood's earliest examples of a Mr. Fanservice.

Originally a circus acrobat, Lancaster took up acting after World War II and made his professional film debut in 1946's film noir favorite The Killers. From there he would make a name for himself playing Lovable Rogues or tough guys in swashbucklers like The Flame and the Arrow and The Crimson Pirate, as well as Westerns such as Vera Cruz and Gunfight at the O.K. Corral. He was often paired with fellow fair-haired Hollywood tough guy Kirk Douglas. Initially saddled with the nickname "Mr. Muscles and Teeth" due to his tall, muscular frame and distinctive smile (which he called "The Grin"), Lancaster resented being dismissed as nothing more than a pretty face and fought to prove his versatility as well as improve his abilities with more challenging roles, which he eventually did thanks to classic dramas such as Jim Thorpe — All-American, From Here to Eternity, Sweet Smell of Success, Elmer Gantry (which won him an Oscar for best actor), Birdman of Alcatraz (where he played real life criminal turned bird expert Robert Stroud) and Judgment at Nuremberg and would continue to prove with offbeat dramas such as The Leopardnote Which he considered his favorite film and The Swimmer. Many of these films featured his longtime friend and former circus acrobat partner Nick Cravat, usually playing mutes in the period pieces where his thick New York accent couldn't be worked around. Other frequent collaborators included directors Richard Brooks and John Frankenheimer.

Lancaster was one of the first Hollywood actors to have his own production company so that he could have more control over his films and was an outspoken liberal Democrat who imbued many of his films with his political sympathies, from westerns tackling racism as seen in The Unforgiven (no, not Clint Eastwood's Unforgiven) to dramas examining social problems such as The Young Savages, as well as anti-war films such as Castle Keep. He reportedly turned down Clint Eastwood's iconic role in Dirty Harry because he found the script offensive and promoting a fascist approach to law enforcement.

He was a popular star but he was not always well-liked by his collaborators, some of whom accused him of having a Hair-Trigger Temper, which led to more than a few stories of altercations between Lancaster and his collaborators off camera (such was the case with The Professionals where director Richard Brooks noticed that Lancaster was not getting along with Lee Marvin and felt he had to keep a close eye on them both for fear that Lancaster would "grab Lee Marvin by the ass and throw him off that mountain."). His daughter Joanna described him as "a big man with a big voice and a big temper... especially when he got up on his soap box about something" in Burt Lancaster: An Intimate Portrait. A notorious ladies man, Lancaster was married three times and had five children, one of whom was the late screenwriter Bill Lancaster, who actually portrayed the young version of Burt's Moses in the 1974 TV-miniseries Moses The Lawgiver - an unusual choice for Lancaster, given that he was a self-proclaimed atheist who reportedly turned down Charlton Heston's role in the 1959 remake of Ben-Hur due to his dislike or distrust of religion (he was actually the original choice to play Samson in 1949's Samson and Delilah but declined due to a bad back). The Walter Matthau character in The Bad News Bears, written by Burt's son Bill, was said to have been based on Burt himself. Along with this, Lancaster (though not out in his lifetime) was bisexual and had many affairs with men as well (as confirmed by a male lover).

A longtime smoker, Lancaster began suffering poor health in the 1980s due to his habit which began to hinder his work and forcing him to turn down or bow out of certain films, such as 1984's Firestarter. He did manage to deliver a heartbreaking portrayal of a failed small time hoodlum in Atlantic City opposite Susan Sarandon and an amusing turn as an eccentric businessman in 1983's Local Hero, as well as a mysterious old doctor in Field of Dreams.

After a career full of charismatic con men, sadistic villains, troubled dreamers and stalwart heroes, Lancaster died of a heart attack in 1994, aged 80.

Burt Lancaster films with pages on this wiki include: