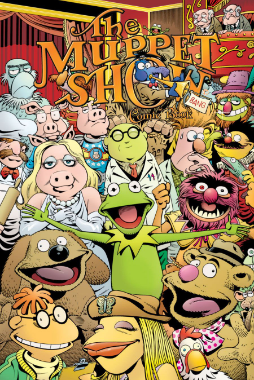 Statler: A Muppet Show comic book! Oh no, they're back to corrupt a whole new medium.
Waldorf: Why's it called a medium?
Statler: 'Cause it's rarely well done! Hoho!
— the first issue
Advertisement:

The Muppet Show Comic Book, published by Boom! Kids, is, well, Exactly What It Says on the Tin: a Comic-Book Adaptation of The Muppet Show. It was launched in November, 2009. It is written and (usually) drawn by Roger Langridge, who had originally wanted to draw Muppet Show comics for Disney Adventures after Disney bought the franchise. Disney Adventures got cancelled before they could run any of Langridge's material (with the exception of a one-page short starring Fozzie Bear in their final issue), but the people at Boom! Studios hired him to do a Muppet Show comic book as part of their new Disney-based imprint of kids' comics.

Unfortunately, as of 2011, the comic is now on hiatus due to Disney's acquisition of Marvel Comics. The fourth and final story arc (Four Seasons, which Boom was about to publish before scrapping the series) was published by Marvel in 2012.

Spinning off from the main comic was Muppet Classics, a series of four-issue miniseries adapting famous stories and fairy tales. Five miniseries were published and completed prior to Boom losing the license, consisting of adaptations of Robin Hood, Peter Pan, King Arthur, Snow White and Sherlock Holmes.

In 2014, an omnibus was published collecting the entirety of the comic (the initial four-issue miniseries, the Treasure of Peg-Leg Wilson miniseries, all 12 issues of the main series, the four-issue The Muppets series published by Marvel when Boom lost the license and the Muppet strips Langridge originally made for Disney Adventures).