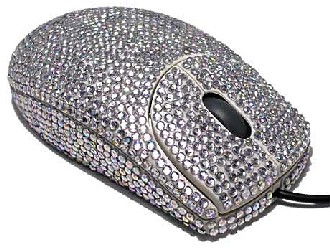 For the rich and nerdy.
Advertisement:

Some things are so commonly studded with jewels that it's almost expected, like crowns, tiaras, and scepters, but these days some people will stick jewels on loads of things. Just look up "bling" on an image search.

Some instances of Crystal Skull are depicted as skulls with gems on them instead of being solid crystal.

This can include real gems or even plastic gems, which are often seen in girls' toys.

Compare Built with LEGO, Gold Makes Everything Shiny, Made O' Gold, Power Crystal, Symbol Motif Clothing. See Bling-Bling-BANG! for when this gets applied to firearms.

Not to be confused with the game Bejeweled.