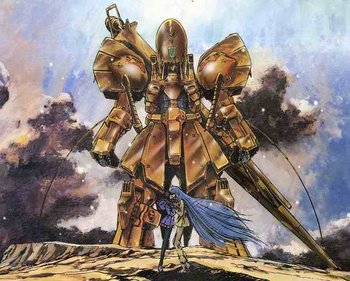 So far away...
This is the tale of the god of light, Amaterasu, and his wife Lachesis, who emerged victorious from an era of wars that raged throughout four solar systems. It will also tell of the many bold and daring headliners who battled courageously during those times, some victorious, some not, but always in the name of chivalry.
Advertisement:

The Five Star Stories (FSS for short) is a long running (began serialization in the venerable Newtype Magazine in 1986) cult manga series created by Mamoru Nagano, who is best known for his collaborations with Yoshiyuki Tomino, especially Zeta Gundam. While not quite his solo debut (that was "Fool for the City", a short story mostly about rock music that was also serialized in Newtype the year before FSS began) FSS has arguably become Nagano's most distinctive work and his career-defining Magnum Opus.

The basics of this epic Space Opera are as follows: somewhere in space there is a region known as Joker. It is made up of four stars named after the cardinal directions (North, South, East and West) and a fifth called Stant on an orbit that takes it within traveling distance of the other four every 1500 years, hence the title. The main four stars all have one or two habitable planets populated by many different nations and peoples. And, being different nations and peoples, they often find an excuse to go to war.

But it is the way war is waged that makes things interesting. The people of Joker learned long ago that weapons of mass destruction were a bad idea, so instead they developed a device that could deploy massive amounts of firepower without the indiscriminate collateral damage of a nuke or planetary bombardment.

Mortar Headds (MH for short) are not like other Real Robot-type mechs. Rather than mass-produced, expendable military vehicles like tanks or fighter planes, an MH is considered a work of art. Each one is an exquisite display of its nation's wealth and craftsmanship that is passed down from pilot to pilot for generations. (The setup will seem familiar to fans of Warhammer 40,000 or BattleTech.)

They are controlled by two operators: a Headdliner, a Schizo Tech Knight in Shining Armor, born with superhuman strength and speed as a result of genes passed down from genetically altered Super Soldiers in the distant past who are the only ones with the proper reflexes to control the machine's incredibly complex movements and their partner, a Fatima, an Artificial Human, (usually female) who controls the mech's other functions and has been programmed to obey the Headdliner.

The main characters of The Five Star Stories, more or less, are Amaterasu, the androgynous god-king of the planet Delta Belune and his Fatima wife Lachesis, who, along with their loyal order of Mirage Knights, are destined to change the face of the Five Stars forever.

Sounds pretty straightforward, right? Maybe even a little cliché? Well just take a look and prepare to be blown away.

Nagano's distinctive visual and storytelling style, a cast of thousands of truly unique and bizarre personalities and extensive Worldbuilding combine to create a truly unforgettable experience, epic in scope and yet peppered with many familiar, domestic touches that draw the reader into a strange and fascinating alien world that may not be so far from their own. Once you've seen it you'll never confuse it for anything else.

The manga has been collected into large-format paperbacks, at least ten of which are currently available in English, though these are difficult to find. (Also, in English each volume is split up into two or three books, which comes out to about 25 or so released so far, really). It has also inspired an animated OAV film which presents a mostly faithful adaptation of the first volume, which inexplicably changed the colors of some of the Mortar Headds and a few character designs were tweaked to be more animation-friendly. Nagano has produced a handful of Concept Albums based on the series with vocals by his wife, voice actress Maria Kawamura.

The Five Star Stories has examples of...