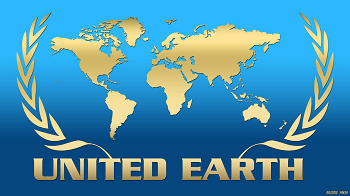 According to a good deal of Speculative Fiction set in The Future™, it is the natural order of things that all governments will merge together to create a central authority to govern the entire species. It's not necessarily the human species, however.

Sapient aliens also almost always have a single government to whom every law-abiding sophont in their race answers. Any conflict between members of the same species will be called a civil war. Especially true if The 'Verse of the show contains boatloads of sapient species.

The examples can cover a range of extremes: the government is benevolent, efficient, enlightened and out for your well-being; just downright evil; or plain realistic, or anything in between.

It may be true that in order to expand to the stars, a species would have to pull together as a team and overcome the tremendous challenges involved. Though it can also be seen as corner-cutting on the part of writers, to avoid having to keep track of more than one government per alien.

Every species in the increasingly crowded galaxy will also have a single unified culture. It can be detailed, as for an alien in the main cast, or it can be a one-note quirk if the creature in question hails from this week's Planet of Hats. Either way, it is rare for any species to have more than one language, artistic tradition, religion, or culinary style.

This trope is not necessarily unjustified. There are a number of conceivable differences in the way an alien race's history played out versus our own that could result in their world being more unified than ours. For example, if their starter population and/or landmass was smaller, or if one tribe conquered the others.

If the species in question is humanity, there may be more diversity involved, if only because the writers don't need to invent it all. The aliens may also look the same.

The United Nations was a popular choice for fulfilling this function before the organization gained a reputation for corruption, indecision and inefficiency that persists to this day. Of course, that in itself can be a useful trope.

Note: If you happen to be in a Christian "End Times" story, and a single government controls the planet, watch out for the dude with the goatee. Alternately, watch out for the guy standing BEHIND the dude with the goatee. If the "villains" are seeking a One World Order to remove the political divisions that enable international war, they may be Well-Intentioned Extremists. If the villains go even further than that, it could be an Assimilation Plot. Earth examples often overlap with United Nations Is a Superpower.

open/close all folders
Anime and Manga
Comic Books
Fanfiction
Film — Animated
Film — Live-Action
Literature
Live-Action TV
Music
Mythology and Religion
Tabletop Games
This fell apart again after two hundred years, leading to a Forever War that has raged on and off (mostly 'on') for nearly four centuries now (2786 to the 'present day' of 3151), with the driving impetus being reestablishing the Star League in one form or another.
Video Games
Webcomics
Web Original
Western Animation
Real Life