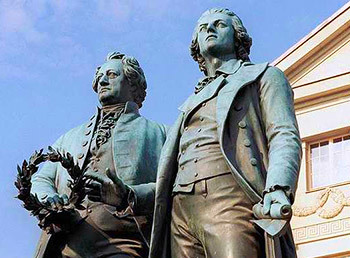 The "Dichterfürsten"note Princes of Poetry Johann Wolfgang von Goethe and Johann Christoph Friedrich von Schiller.
"In the beginning, the good God gave to the French the dominion of the land, to the English the dominion of the seas, and to the Germans the dominion of the clouds."
— Jean Paul Richternote This famous phrase has been much mangled since it first appeared in Richter's Peacetime Sermon to Germany in 1808. There it took the form "...and so, just as the French are the masters of the land and the English those of the larger seas, we [Germans] are the masters both of those and of the air encompassing everything..." . The phrase was popularized by its appearance in an extremely abbreviated French form in Mme. de Staël's About Germany (1813); by 1827 or so it had been haphazardly Englished and became a favorite of English newspaper editors (who, as Thomas Carlyle growled in The Edinburgh Review, knew precious little else of Richter). Though later commonly interpreted as meaning that the Germans lived only in their imaginations, one may note that Richter himself stated that the Germans are masters, not only of the air, but of the land and sea as well; by this he was not asserting a universal Teutonic empire, but that the Germans typically displayed all the characteristics of all the various nations of Europe.
Advertisement:

"Das Land der Dichter und Denker" ("The land of poets and thinkers") is a common nickname Germans give to their country. The German self-identity has always laid emphasis on a shared culture and language, due to Germany not being a unified country at the time nationalism became the latest craze in Europe. And because of certain events during the years 1933 - 1945, seeking patriotic feelings in military accomplishments (or, as is often the case, even expressing any patriotism at all) is no longer en vogue in Germany. This fact has perhaps even strengthened the traditional German emphasis on cultural and scientific achievements.

It's worth noting that during WWII even some Allied wartime propaganda acknowledged this, portraying the Nazis as crushing Germany's widely-admired cultural output with their unsophisticated militarism (this is in contradistinction with most other propaganda both in WW2 and WW1, when German Kultur was depicted as being brutal Prussian militarism).

, the Germanies and later unified Germany indeed was a powerhouse especially in natural sciences (and in that field, again especially in physics). After 1945, not so much. No prizes for guessing the reason.

(About a third of the leading researchers were Jewish, another third opponents to the Nazis and the rest were scooped up by the Allies after the war.)

The expression was coined by literary critic Wolfgang Menzel in 1836. According to economic historian Eckhard Höffman, as quoted by the magazine ''Der Spiegel''

, Menzel didn't have in mind the actual "thinkers and poets" Germany is famous for, but rather a "strange" (for the time) predilection for reading books; as there was no copyright law in Germany at the time, there was no monopoly on the individual books they published, so the publishers had to mass produce those books at cheap prices (alongside deluxe editions for the rich) to recover the money they invested; this led to an increased interest in reading (as already mentioned) and, as some of those books were of a technical, practical or scientific nature, Höffman argues that this mass readership led to the rise of Germany as an industrial power. Another interpretation (which only really works due to the ambiguous German syntax) is that "Land der Dichter und Denker" was supposed to mean "the land that only exists inside the heads of poets and thinkers" as opposed to the other countries that actually existed in real life. And for most of the 19th century, Germany really was more of an abstract concept talked about by intellectual elites than an everyday reality like Britain or France.

After 1945 some changed the wording to "Land der Richter und Henker" - land of judges and executioners, due to the way in which the legal profession had been largely complicit in the Nazi crimes.

And so without further ado, we present you a list of some famous German "Dichter und Denker":

Actual Poets and Other Writers