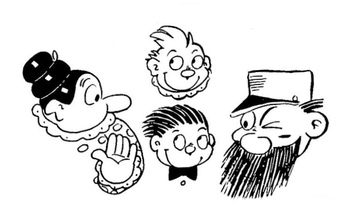 The Katzenjammer Kids is a classic Newspaper Comic created by German-American cartoonist Rudolph Dirks. It holds the distinction of being the longest-running newspaper comic in history, having run uninterrupted since 1897, when it debuted as a Sunday panel in William Randolph Hearst's New York Journal. Dirks was inspired by the German illustrated children's book Max and Moritz.

In 1914, following a series of nasty legal battles, Dirks quit the Hearst organization (later King Features Syndicate) and started a new version of his comic, featuring his same characters but renamed The Captain and the Kids for the rival Pulitzer chain, eventually distributed by the United Feature Syndicate. Dirks would continue to draw The Captain and the Kids through the 1950s, after which his son John took over until that strip ended in 1979. Meanwhile, the original Katzenjammer Kids strip continued under the pen of Harold H. Knerr until 1949 and a succession of artists afterwards. Hy Eisman drew the strip until 2006, when it went into weekly reprints.

The Sunday "topper" for Dirks was Hawkshaw the Detective (drawn by Gus Mager), a parody of Sherlock Holmes with monkeys while the Knerr strip had Dinglehoofer Und His Dog Adolph. Adolph was replaced by "Schnappsy" because of some guy down in Germany. The Katzes themselves were briefly renamed to The Shenanigan Kids (Hans and Fritz became two Dutch boys named "Mike" and "Aleck") because of anti-German sentiment during World War I.