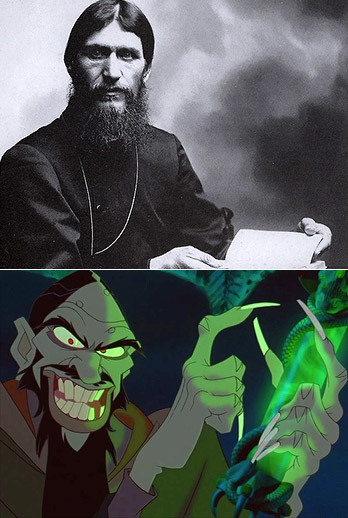 Grigori Rasputin, for all his faults, wasn't an evil lich... probably.
"... And every tale condemns me for a villain."
— King Richard III, Richard III
Advertisement:

OK, let's say you're still writing that movie, which is Very Loosely Based on a True Story. You chose a period of history that involves a lot of exciting fight scenes and explosions so your audience won't fall asleep and now you need some main characters, but there's a problem: most of the Real Life figures were morally grey and complex people. How are you going to make sure that your audience knows who the bad guy is?

Well, all you have to do is to pick someone who wasn't on your side. If you're American all you have to do is choose an evil Briton or German or Russian or Arab. Or failing that, an Italian or a Scotsman (just as long as they fought alongside those dastardly Anglo-commie-terror-nazis.) And if you're English you'll want to use one of the Anglo-Saxon bastards against the brave and heroic King Arthur. Or those treacherous English bastards against that brave and heroic King William the Con... Hey—wait a second... but hang on. There's another problem. Your new villain wasn't actually "evil" per se. Well, all you have to do is give your newfound villain a few Kick the Dog moments, adjust his appearance to something more recognizably evil and ignore anything of his life that doesn't fit your artistic vision.

Note that just because this happens to someone does NOT mean that he or she was a good person in Real Life; it is perfectly possible to make absolutely anyone seem even more evil than in reality (yes, even Hitler). Also note that this isn't necessarily a bad thing, as it is often done to make a better story.

A lot of sports movies do this to the coach of the Opposing Sports Team; turning him or her from a paid professional whose job is to ensure that his team wins to a callous bastard whose philosophy is "win at any cost".

This trope is the opposite of a Historical Hero Upgrade, although many figures often get one of those as well in works with a different viewpoint. They may also appear alongside each other when applied to different people, to make the Black-and-White Morality contrast even more obvious.

Usually this is a part of Politically Correct History, although it can just as easily be the exact opposite. When Fan Fic writers do this to a canon character, it's Ron the Death Eater. When an adaptation does it to a character from a previous story, it's Adaptational Villainy. Simply using bad people from history as villains goes under History's Crime Wave.

May overlap with Historical Badass Upgrade, Historical Ugliness Update, Beethoven Was an Alien Spy, Ancient Conspiracy or Flanderization. Compare with Hijacked by Jesus and Everybody Hates Hades, which do this to a member of a polytheistic pantheon. Contrast with Historical Villain Downgrade.

Sub-Trope of Demonization.
And Super-Trope to:

Fan Works
Film — Animated
Webcomics
Western Animation
...But criticize them, pedants, as ye may
The mighty dead will smile at what you say
Feedback