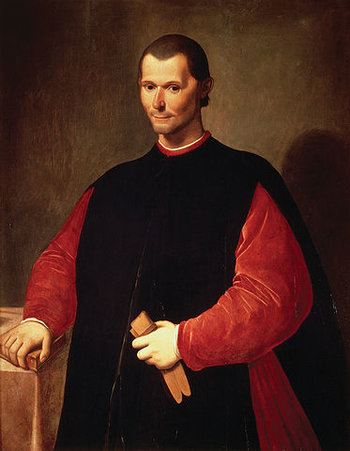 "Anyone who studies present and ancient affairs will easily see how in all cities and all peoples there still exist...the same desires and passions. Thus, it is an easy matter for him who carefully examines past events to foresee future events... But since these matters are neglected... or, if understood, remain unknown to those who govern, the result is that the same problems always exist in every era."
— Discourses on Livy
Advertisement:

Niccolò di Bernardo dei Machiavelli (3 May 1469 – 21 June 1527) was a Florentine writer, philosopher, and political theorist active at a time of great chaos and turmoil throughout Renaissance Italy. He is best-known for writing The Prince, a handbook for the ruling Medici family on how to most effectively run a principality. Due to The Prince being his best-known work, coupled with the fact that few who quote it have actually read it, Machiavelli's name has become a byword for being a ruthless, manipulative, backstabbing bastard; so much so that in Christopher Marlowe's The Jew of Malta, Machiavelli is presented on stage as the narrator of the prologue, and the term Old Nick to refer to The Devil may also be derived from his forename.

This reputation is perhaps undeserved as some of his other works, notably Discourses on Livy, are all about successfully running republics, and even in The Prince he states that a republic is the best form of government. In the eighteenth century the view that the book was actually an elaborate parody became fashionable given both the nature of Machiavelli's other works and the fact that The Prince was written just after he was stripped of his power, imprisoned, and tortured by the Medicis. In the early nineteenth century Germany it became fashionable to suggest that The Prince needed to be judged relatively, though the tradition began even earlier than that.

Already in the 18th Century, it was fashionable among Enlightenment philosophers to regard Machiavelli as their inspiration. Jean-Jacques Rousseau was a major admirer of his works, was among the first to suggest that The Prince need not be taken at face value, and regarded Machiavelli as a republican. The founding fathers of the United States were also familiar with his writings; James Madison in particular was deeply interested in Machiavelli's theories, and may have had them in mind both in his drafts for the Virginia Plan (which, heavily modified, became the United States Constitution) and in his contributions to the Federalist Papers.

Hegel argued that The Prince was written for a certain time and certain locale and to judge it based on contemporary morality and from the perspective of someone living in a unified nation state was unfair. Since the mid-twentieth century, the most common interpretation of The Prince is that it simply describes, as Francis Bacon said, "what men do, and not what they ought to do" and that it is the first true work to deal with politics as a branch of science and not ethics. Another misinterpretation of Machiavelli is seeing him as someone who wrote for the benefit of [insert favorite mass murdering tyrant here]. This is unfair to Machiavelli considering that someone like Hitler doesn't need a centuries dead philosopher to give him permission to go on a murderous rampage, whereas a democratic leader with a strong moral compass like Abe Lincoln or Winston Churchill might have doubts about what their duties as a leader are. And, for that matter, Machiavelli would probably have approved of pragmatic democratic statesmen like Nixon or Disraeli more than insane ideologues like Hitler or Stalin.

However, one must be careful not to assume that Machiavelli was truly pro-democracy. In Discourses on Livy, he takes the time to state that pure democracy isn't a great idea either, and the best form of government is one that combines democracy, aristocracy, and monarchy so that the different social classes can keep each other in check. On the other hand, the liberal movement which (openly or otherwise) adopted Machiavelli's philosophy more or less took the same opinion. Indeed, modern representative democracy would rather please Machiavelli, as it more or less reflects his ideals (a popularly-elected legislature is not a democracy as he understood it, but close enough to serve in the position in his three-in-one system;note To elaborate, Machiavelli considered Rome the model, and Rome was a single small republic that conquered and collected tribute from other city-states and thus could have a direct-democratic element in the city. The idea of representative government was essentially an English invention, and the idea that the territory of a republic could — indeed, should — encompass thousands upon thousands of square miles was straight from the mind of James Madison — who, again, made no bones about his interest in Machiavelli. the modern investment of a great deal of power in directly-elected presidents and indirectly-elected prime ministers is a pretty good approximation of his idea of "monarchy"; and both the role of less-representative upper legislative houses — like the US Senate and British Lords — and small, well-educated judicial courts are close to his concept of "aristocracy").

Like many of that era, Machiavelli believed that Ancient Rome was the peak of human civilization, particularly the Roman Republic, and he often uses its example to illustrate political points. Indeed, he can be seen as rejecting "Christian" ideas of thinkers like Augustine — politics must be understood through a higher form of knowledge, private and public morals should be consistent, history is linear and purposeful, etc. — for "pagan" ones of thinkers like Aristotle — history is cyclical, politics must be understood on its own terms, states and leaders behave differently from private citizens. Interesting enough, this is a dichotomy that is still relevant today: compare the Clash of Civilizations and the End of History with Greco-Roman and Christian political thought, respectively.

As well as his political works, Machiavelli wrote several books of history and a number of poems and satirical novels and plays.

His works include, but are not limited to:

Tropes related to the actual man