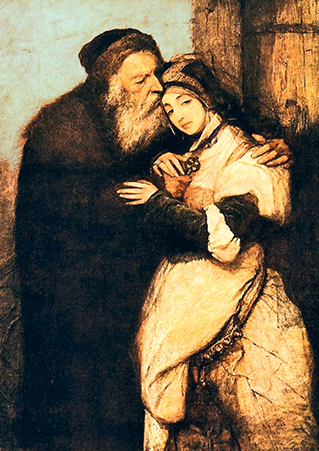 He's got no faloorum, he's lost his ding-doorum
So maids when you're young never wed an old man

The Mal Mariée (French for "badly married") is a young woman unhappily married to a much older man. Not just a year or two — there is a significant age difference. She is almost always innocent and beautiful, and was likely married against her will. He is probably ugly, probably cruel, and definitely obsessively jealous; he often keeps her imprisoned (most iconically, in a tower) to avoid her interacting with other men.

This never works. The more he tries to keep her for his own, the less she wants to do with him — and sooner or later, some handsome young knight, poet, student, or fairy will find a way to romance her.

The implication is typically that he can't satisfy her because, at his age, he can't get it up. But he's probably too ugly for her, in any case.

The older spouse is highly protective and tends to be aggressive towards any other character who even so much as hints at interest in their spouse. He is also often harsh and cruel towards his young wife because he constantly thinks she's cheating. If she's not cheating, she very often will eventually because he suspects her anyway and his jealousy is disgusting. Or he can be absolutely clueless. The story may end with the young wife outsmarting her husband and being happy with her lover, but it can also end in long suffering or tragedy.

Sub-Trope of Sympathetic Adulterer. Frequently this trope follows from an Arranged Marriage or a Marriage of Convenience. Contrast Age-Gap Romance and May–December Romance, which is for couples with a major age difference who form a functional, loving relationship. See also Old Man Marrying a Child. All Women Are Lustful (a more common trope in the medieval era) also plays into this.

Very common in medieval literature, particularly in troubadour and trouvere poetry and the lais of Marie de France. A Forgotten Trope now, though it may get nods in stories with medieval or medieval-inspired settings. The trope is however subconsciously recognized by the audience who feel uncomfortable with predatory old men who romantically pursue and exploit very young women.