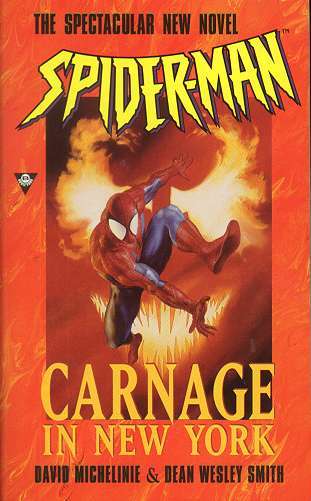 Carnage In New York is a 1995 Spider-Man novel written by David Michelinie and Dean Wesley Smith. Spider-Man rescues Dr. Eric Catrall, a scientist, from government agents. Simultaneously, serial killer Cletus Kasady is brought to New York to undergo an experiment that would purge him of the Carnage symbiote, which is bonded to his bloodstream. Catrall infiltrates the experiment and in the confusion Carnage escapes, taking Catrall with him. When Catrall turns up in jail, Spider-Man learns he had invented a chemical that drives people insane with bloodlust, and the government wants it back in order to weaponize it. Even worse, the serum is now in Carnage's possession. Spider-Man is forced to go toe-to-talon with one of his most dangerous foes to retrieve the serum, which could make all of New York just as bloodthirsty as Carnage himself. 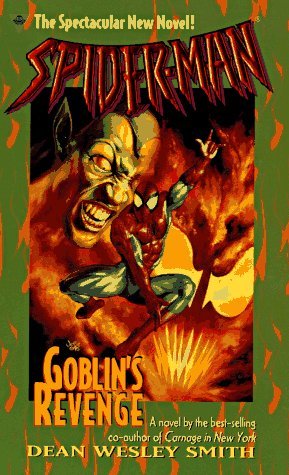 Goblin's Revenge is the sequel to Carnage in New York, written by Dean Wesley Smith in 1996. In the immediate aftermath of the preceding novel, the Green Goblin steals Catrall's serum from Mr. Fantastic, intending to use it on Spider-Man, and breaks Cletus Kasady free from the Vault. Simultaneously, a covert black-ops team working for Lifestream Technologies has been hired to retrieve the serum and is targeting Spider-Man. Peter must now retrieve the serum again, defeat the Green Goblin and Carnage, and avoid the hit men gunning for him if he wants to survive.

These novels contain examples of the following tropes: