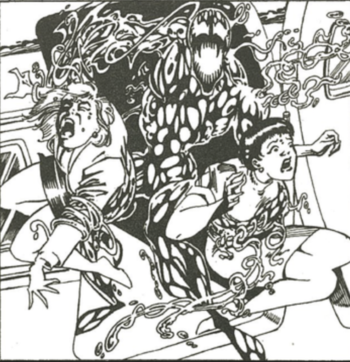 Carnage more than lives up to his name. These are only two of his many dozens of victims.
Modok 1.5: I intend to...terminate...every man, woman, and child on the planet...overnight...
Iron Man: Destroy humanity?...Why?...
Modok 1.5: That is my purpose. That is my destiny...Then I shall cleanse the planet of all...life before moving on...throughout the cosmos. The Skrulls, the Kree, the Shi'ar—all extraterrestrial civilizations will fall before the unstoppable doomsday machine that is Modok. This is my vision. This is the future.
— Operation A.I.M.
Advertisement:

Given the source material, it comes as no surprise that books and short stories based on Marvel feature despicable doers of dastardly deeds.

Within each category, works are listed by publication date unless noted. Works do not share a continuity unless noted.

1990s Marvel novels, published by Byron Preiss and with a roughly shared continuity (according to Word of God)

Novels for adults, copublished by Berkley Boulevard, in rough chronological order Continuity Note These have a stricter continuity.
Examples

"Super Thrillers" for young adults, copublished by Simon & Schuster's Pocket Books Continuity Note These have looser continuity, but are more or less in the same continuity as the above; Depending on the Writer may apply.