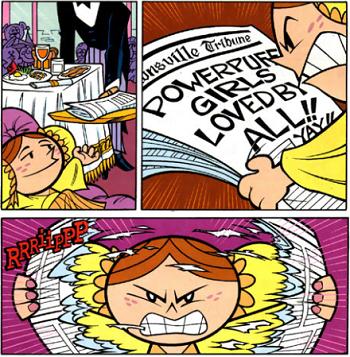 Who's the greenest one of all?
"In the untalented, excellence generates a sense of wonder and amazement. In the merely talented, on the other hand, genius creates burning hatred and jealousy."
— Harlan Ellison, from his introduction to The Sandman: Season of Mists by Neil Gaiman
Advertisement:

Sometimes, the hero's many strengths and talents will inspire due awe and respect... and envy. No matter how amazing and lovable the protagonist is, these traits will invariably manage to rub somebody the wrong way, sometimes prompting people into doing horrible things just to get the hero out of their sight.

A sub-trope of Green-Eyed Monster, Driven by Envy is a trope that deals specifically with a character acting on his envy. It is related to Always Second Best. Expect the character to think the one he envies is as preoccupied with him as the other way around, and even that he deliberately excels in order to rub the envious character's nose into it.

For those instances where love, rather than envy, is the impetus for the misdeeds, see If I Can't Have You... and Murder the Hypotenuse.

Michael is driven entirely by his jealousy towards Lucifer. Jealous of his life, his charm, his friends.

Michael is driven entirely by his jealousy towards Lucifer. Jealous of his life, his charm, his friends.