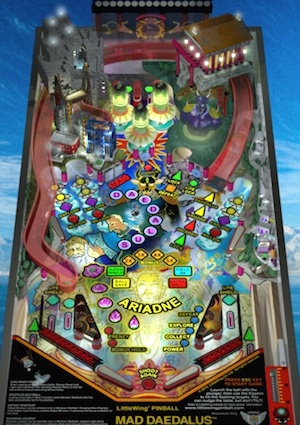 Daedalus: "Welcome to my labyrinth."
Advertisement:

In 2010, LittleWing released Mad Daedalus, a Digital Pinball Table and the sequel to Loony Labyrinth.

This game revisits the land of ancient Minos by introducing the Athenian scientist Daedalus and Ariadne, a sentient AI he found in a wrecked spaceship. During the events of Loony Labyrinth, they had helped Theseus defeat the Minotaur, but were unable to return with him to the present day. Recognizing the Loony Machine as his future handiwork, Daedalus set out to recreate it, in hopes of escaping to the future and finally repairing Ariadne. But before the two can perform their time jump, they are raided by their patron, King Minos, who is desperate to keep their technological treasures for himself — and it's up to the player to use his pinball skills to save Daedalus and Ariadne...

Mad Daedalus is available for the Apple Macintosh and Windows PC, with a free trial that unlocks to the full game. Compared to Loony Labyrinth, this is a tougher sequel, with faster and more challenging gameplay to go with its more serious tone.