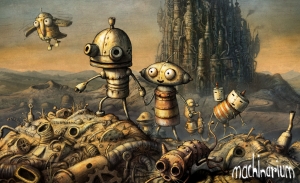 Machinarium is a Point-and-Click Adventure Game by the independent Czech studio Amanita Design.

The main character is a robot named 'Josef' (named after Josef Čapek, who invented the word robot for his brother's play) who's been thrown out with the garbage, for some reason. He must get back into the Steampunk city of Machinarium, populated entirely by a variety of robots, and stop the plans of the villainous Black Cap Brotherhood.