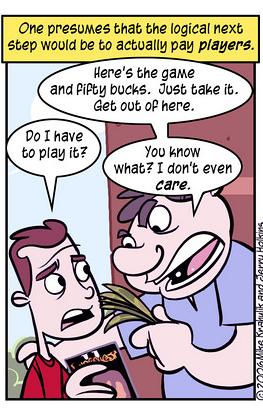 an Everquest pusher.
"Who cares about throwing a ball or having a kid?
It'll get you nowhere in life,
Not like getting anywhere matters.
Although, I guess it does if you care,
Which I don't."
— Crazy Ex-Girlfriend, "I Could If I Wanted To"

A character, having faced an indifferent world for so long, finally gives up all pretense of trying. They do the bare minimum to try to get the job done, and make no effort of initiative elsewhere. They knows that whatever they try isn't going to work, so it's just easier to be jaded and cynical (and right) than to be constantly disappointed by plans that never work.

Depressing as that sounds, this trope is almost always played for comedy. This is because the trope is a popular part of Deadpan Snarker mentality. One of the benefits of not caring is that there's nothing stopping you from making cynical, ironic and humorous quips about the world around you. Granted, said character won't be much fun to be around since he makes these jokes at the expense of nearly everyone else, but again, he doesn't care, and it's not like anyone's going to have the guts to actually do something about it since his irritation doesn't go past his passive-aggressive sarcasm.

But sometimes, they stopped caring because it hurt too much.

This should not be confused with a related concept, Professional Slacker, which is when a character makes an aggressive effort to do as little work as possible.

When used seriously, the character has probably crossed the Despair Event Horizon, overlap with Silly Rabbit, Idealism Is for Kids!, or become Too Broken to Break. Compare Giving Up on Logic, Then Let Me Be Evil, Jaded Professional, The Fatalist, and The Power of Apathy. When one's descent into cynicism is triggered by a particular event (rather than a gradual grind over time), see Cynicism Catalyst. If a new character appears and the process starts all over again, see Logical Latecomer. If a work does this to its audience, it's Too Bleak, Stopped Caring. When this happens to a creator of a work, see Creator's Apathy.

Reverend Lovejoy explains to Marge how the constant calls of Ned Flanders drained entirely his enthusiasm of helping people.

Alternative Title(s): I Dont Even Care

Reverend Lovejoy explains to Marge how the constant calls of Ned Flanders drained entirely his enthusiasm of helping people.