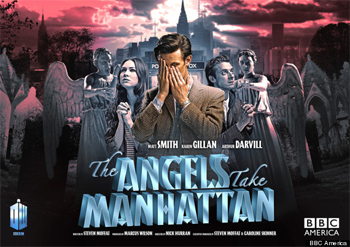 Don't blink.
"The Angels take Manhattan! Because they can. Because they’ve never had a food source like this one: the city that never sleeps."
— The Doctor
Advertisement:

The one where The Ponds meet their maker for good. Right in front of the Doctor and their daughter.

And the Statue of Liberty is a Weeping Angel. And so is a statue in Central Park. And we learn Weeping Angels tykes are just as nasty as the grown-ups.

The Doctor, Amy and Rory visit modern-day New York. The Doctor has found a nice trashy detective novel about one "Melody Malone" in his jacket pocket, and Amy teases him about how he's obviously started to fancy the lead Femme Fatale. The Doctor rips out the last page, claiming that he hates endings. While they banter, Rory goes to get coffee and, in the grand tradition of Doctor Who companions wandering off, gets himself into trouble almost immediately. He encounters a Weeping Angel and is zapped back to Film Noir-era New York, where he runs into Professor River Song, who's investigating the Angels while posing as a private detective.

The Doctor starts to properly panic when his novel suddenly starts describing exactly that. He puts two and two together and realises that Melody Malone is Melody Pond, and that Rory's in a whole lot of trouble. By the time he and Amy have managed to land the TARDIS near River (after an initial failure caused by heavy time distortions in that space-time region), Amy has already read ahead just a bit too far in the book, and there are far too many mentions of deaths, and endings, and goodbyes. The Doctor tells her to stop reading, but they do need to comply with what's already been read. River, who hasn't even written the book yet, finds herself forced to break her own wrist.

She and the Doctor engage in Slap-Slap-Kiss for a while, and both try very hard to be what they think the other wants them to be. River tries to hide her broken wrist so as not to scare him and remind him that his loved ones can break, the Doctor gets extremely sad that she lied to him and uses some regeneration energy to heal her wrist, and she slaps him hard in the face for his senseless waste of regeneration energy and tells him it's so, so hard to love an ageless god with the face of a twelve-year-old who can't cope with the idea of change. It's also revealed that River was eventually pardoned from Stormcage when the man she killed turned out to have never existed — the Doctor has been systematically removing himself from every database in the universe.

Meanwhile, Rory has been zapped around again by a nest of Weeping Angels, but this time just spatially. The rest of the group catches up with him, and they find the Angels' harvesting grounds: a building where people who are sent back in time are forced to live out the rest of their lives, to be fed on by the Angels forever. Rory arrives just in time to watch his withered old self die, saying goodbye to a heartbroken Amy one final time. Really, properly scared, he escapes to the roof, where the Statue of freaking Liberty is waiting to feed on him. Rory decides to kill himself to create a paradox, poisoning the Angels' temporal energy and preventing his future death from happening in the first place. (He also reasons that he may even survive — he usually does.) After a very emotional exchange, Rory and Amy jump off the building's roof, clinging to each other. With that, the harvesting grounds never existed, the Statue of Liberty never moved about New York and Rory never died of old age in that small room.

They actually do survive, and end up in the graveyard where the story started, although the web of time is stretched to the point where the TARDIS should really stay out of Manhattan for the rest of her life. However, Rory notices his name on a gravestone right before a surviving Weeping Angel zaps him back in time again. Amy decides that the very small possibility of a life with Rory is better than a secure life without him, and despite the Doctor begging her to stay, she turns away from the Weeping Angel. Her name appears below Rory's on the gravestone, both having lived a full life together and died of old age.

River knows she must visit her parents with her Vortex manipulator one last time to complete the Stable Time Loop, and sets about writing her novel to get Amy to publish it. River then tells the Doctor that she'll tell Amy to write an afterword for the Doctor, and the Doctor remembers about the last page of the novel he ripped apart right at the start of the episode. He then proceeds to race back to the park and reads the page that contains Amy's last words:

Afterword, by Amelia Williams. Hello, old friend. And here we are, you and me, on the last page. By the time you read these words, Rory and I will be long gone. So know that we lived well and were very happy. And, above all else know that we will love you always. Sometimes I do worry about you, though. I think, once we're gone, you won't be coming back for a while, and you might be alone, which you should never be. Don't be alone, Doctor.

And do one more thing for me: There's a little girl waiting in a garden. She's going to wait a long while, so she's going to need a lot of hope. Go to her, tell her a story. Tell her that if she’s patient, the days are coming which she’ll never forget. Tell her she’ll go to sea and fight pirates, she’ll fall in love with a man who’ll wait two thousand years to keep her safe. Tell her she’ll give hope to the greatest painter who ever lived, and save a whale in outer space.

Tell her this is the story of Amelia Pond, and this is how it ends.

And the scene shifts back to when the little Amy Pond waited for the Doctor, and as was already briefly seen in "The Eleventh Hour", she hears the sound of the TARDIS.