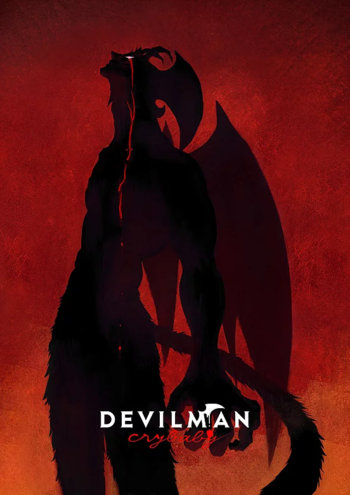 "Now, history has been revived!"
"I've made Akira into a devil. And... I might have just created the most powerful, ruthless, and brutal devil in this world."
— Ryo Asuka

DEVILMAN crybaby is a 2018 animated adaptation of Devilman by Go Nagai. Directed by Masaaki Yuasa (The Tatami Galaxy, Mind Game, Ping Pong), produced by the studio Science Saru, and written by Ichiro Okouchi (Code Geass, Kabaneri of the Iron Fortress), it was released internationally on Netflix in January 2018.

Akira Fudo is a kind-hearted young man who is known to cry for others. One fateful day, he is reunited with his childhood friend Ryo Asuka, who enlists his aid in finding demons. In the carnage that ensues, Akira finds himself fused with the wicked demon Amon. Rather than fall victim and become a host for Amon, however, Akira's kind heart gives him the strength to make Amon's power his own, and thus, Devilman is born. With his newfound demonic powers, Akira puts himself to the task of protecting those closest to him from the demonic hordes... and perhaps even protect humanity from itself.

Nobody knows the real devil.