Literature / Luke Skywalker and the Shadows of Mindor 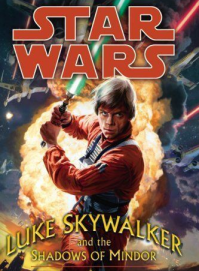 "None of the stories people tell about me can change who I really am."
— Luke Skywalker
Advertisement:

Luke Skywalker and the Shadows of Mindor

is a 2008 Star Wars Legends novel by Matt Stover.

It's been six months since Return of the Jedi, and the Rebel Alliance has become the New Republic while the Empire is in the early stages of splitting into rival factions. Luke Skywalker is now General of the Rapid Response Task Force, a small fleet that the Republic sends as needed to patch up the front and execute special missions. Their current assignment: to track the forces of a theatrical and megalomaniacal Imperial warlord with the unlikely name of Lord Shadowspawn to his home base and bring him to justice. This base turns out to be on Mindor, a former vacation world devastated by repeated meteorite impacts.

When Luke tracks Shadowspawn's forces there, he gets drawn into a trap, as do Han, Leia, and Rogue Squadron who come after him, and Lando Calrissian and the gang of Mandalorian mercenaries who come after them. It turns out that a dark presence has been waiting on Mindor to make its move with a scheme that threatens not only Luke's life, but his very soul...

Has much in common with two of Stover's previous works in this setting, with multiple characters from Shatterpoint appearing and various themes from it and the Revenge of the Sith novelization recurring.