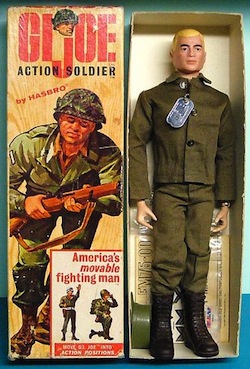 "G.I. Joe, G.I. Joe
Fighting man from head to toe
On the land, on the sea, in the air..."
"G.I. Joe is the code name for America's daring, highly-trained special mission force. Its purpose: to defend human freedom against COBRA, a ruthless terrorist organization determined to rule the world."

G.I. Joename origin As far back as World War II, "G.I. Joe" (for Government Issue Joe) was slang for an American rank-and-file soldier. There was even a movie titled The Story of G.I. Joe that came out in 1945. The name was popularized by cartoonist Bill Mauldin and journalist Ernie Pyle, who eventually had his own G.I. Joe 12-inch figure. is a franchise created by American toymaker Hasbro in 1964 to promote their line of military toys. Notably, the original toys were the very first to be called "action figures" (to appeal to boys who didn't want to play with "dolls", although the line was conceived as a Spear Counterpart to Barbie). In this first incarnation, G.I. Joe was the name of the main character, and the figures were based on each branch of the United States military. However, the increasing opposition to The Vietnam War caused the brand's popularity to decline, so in the late 1960s the franchise reinvented itself as the "Adventure Team", trading warfare for exploration in exotic locations. While the drastic change allowed G.I. Joe to survive Vietnam, the line was eventually ended in 1976. The following year, Hasbro tried to keep the franchise going with the successor Super Joe, a line of 8-inch figures with a Science Fiction theme, but this Continuity Reboot lasted only two years.

The second incarnation of the franchise began in 1982, four years after Hasbro's rival Kenner launched their popular Star Wars toyline. Unlike G.I. Joe, which had 12-inch action figures, Star Wars figures were 3¾ inches tall, allowing them to also sell playsets and vehicles at low prices and thus make even more money. Seeing the massive profit Kenner was making, Hasbro decided to relaunch G.I. Joe in the new scale and hired Marvel Comics to create a story, characters, and media tie-ins for the line. Marvel eventually came up with a premise that is still the core of the franchise today - G.I. Joe was no longer one person,note except in some continuities, where the team is named in honor of General Joe Colton, the man responsible for its creation, but the name of an elite American military unit engaged in a battle against the terrorist organization Cobra and its plans to Take Over the World. To promote the line (now dubbed G.I. Joe: A Real American Hero), Marvel launched two tie-ins:

By 1994, A Real American Hero was officially dead at retail, but Hasbro has since launched several other incarnations of the franchise, though none have ever gained the longevity of the original. The versions of the brand released since the end of ARAH include:

In celebration of the franchise's 50th anniversary in 2014, G.I. Joe was licensed for Kindle Worlds (allowing the publication and sale of fan fiction).

Quotes page added, examples are needed for it, please.

And knowing is half the battle.