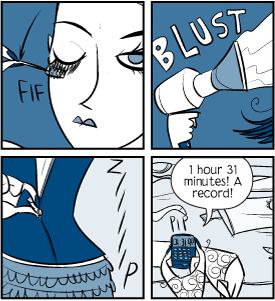 "Make up and dress up
I become very lovely too!"
— Hatsune Miku, Sweet Devil
Advertisement:

The Distaff Counterpart of the Lock-and-Load Montage. The heroine puts on her makeup and clothes while preparing for the Big Event. The key to the trope is that she applies her makeup with the same speed and seriousness as a soldier loading their guns—she's all business, and her business at the moment is looking good. May count as Mundane Made Awesome.

Often juxtaposed with a standard Lock-and-Load Montage. A Femme Fatale and/or an Action Girl might even do both simultaneously. The rare examples of a man doing this tend to be Played for Laughs. Alternately, a male Badass in a Nice Suit might be getting ready for business while making sure he looks as sharp as possible, but this doesn't usually involve makeup.