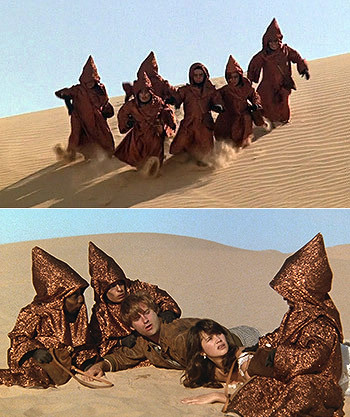 Dink dink!
"Neither of us said anything. We just watched the Hanjii ride out of sight into the line of the horizon, an undulating line of black against the brown. The sun beat down on our heads, reminding us of its presence, and I wished it was a god.
Because then we might reason with it.
Del turned to face me squarely. She waited.
I sighed. 'We walk.' I answered her unasked question, 'and hope we're found by a caravan'."
— Jennifer Roberson, Sword-Dancer
Advertisement:

Anyway, our heroes have been walking for days without drinking a single drop. They faint and the screen turns to black. This is the end of our heroes, right?

Wrong: It turns out that our heroes were rescued by a traveling caravan and are now safe again.

This happens often enough that one may wonder whether dying people are a magnet for bedouins. Of course, a Doylist will point to the Anthropic Principle as an explanation.

If not in a desert, substitute: friendly Noble Savage natives on the American plains or in the jungle, Sherpas or Buddhist monks in the mountains, Aborigines in Australia, Inuit or Aleuts in the frozen north, or Bushmen in South Africa. In Speculative Fiction, any Fantasy Counterpart Culture for the above can fill in. Any of these groups may try to teach the hero something as he recovers. For shipwrecked people in the ocean, native fishermen or even dolphins might pitch in.

When the bedouins or other firstcomers are actually just there to rob our heroes blind, they're Desert Bandits.

Note that actual aloof, practical, eccentric but ultimately noble bedouins in modern settings have been supplanted in pop culture and the minds of western audience by Kalashnikov-waving insurgents or Mujahadeen, for however accurate or inaccurate that might be. Also, notice that this trope has its roots in real life; since in harsh environments a person never knows when they might fall in need of help, it is in society's interest to have such a code.