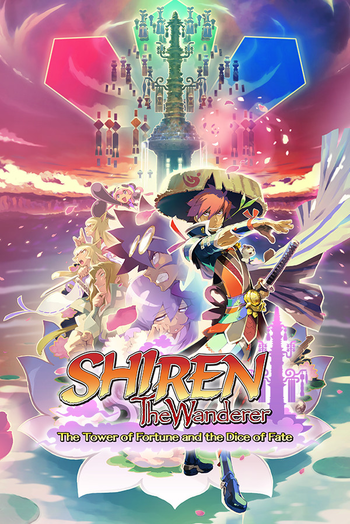 The flagship RPG series of Chunsoft, the Japanese publisher/developer who is most famous worldwide for Pokémon Mystery Dungeon. Shiren the Wanderer features roguelike gameplay, which is set against a fantasy version of feudal Japan. Most of the games have you control Shiren, a wandering adventurer who wears a distinct kasa hat. Only three games in the series have been released to Western audiences.
Advertisement:

The series so far:

Along with the main installments, there have been a few gaiden games:

One notable detail about Shiren the Wanderer is that it's the only Mystery Dungeon series that uses original Chunsoft characters, as opposed to characters from Dragon Quest, Pokémon, Final Fantasy, or Etrian Odyssey.

For the first game in the series, only the DS version has been released outside Japan. The Wii version of Shiren 3 and the PS Vita, Switch, and Steam versions of Shiren 5 also had overseas releases.

Masato Kato is the scenario writer for Shiren 3, and he was also involved in Shiren 4.