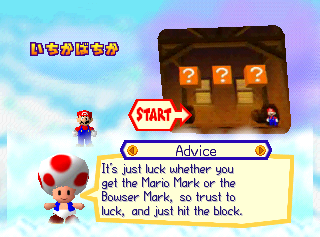 So luck-based, they cut it out of Mario Party.
"If no mistake have you made, yet losing you are... a different game you should play."
— Yoda, Star Wars: Shatterpoint
Advertisement:

A bane to many gamers, the Luck-Based Mission is a section in a game in which winning depends on luck. The worst examples completely remove skill as a factor. Regarded as frustrating at best and often an infuriating stumbling point, the games that actually feature this as a requirement are thankfully few, but still, they're present. Save Scumming is a requirement.

A particularly repellent form of Luck Based Mission is one where the game mocks you for failure. As if it's your fault that the Random Number God is displeased. Then again, inciting the Atomic F-Bomb tends to help a few types of people vent their frustration on anything other than an unrelenting computer. (Others threaten it with the junkyard.)

This trope is particularly vexing for speedrunners; gamers can pour as much practice as they want into perfecting skill-based portions of the game, but that won't stop their speedruns from being ruined by one bit of bad luck. Ditto with score attackers, who find that a significant portion of their points come from luck-based elements.

A Sub-Trope of Fake Difficulty. Sister trope to Timed Mission and Escort Mission. Cousin trope of Trial-and-Error Gameplay. Has a very high chance of being That One Sidequest, and might be rewarded with That One Achievement.

As ever, though, Tropes Are Not Bad, since a game can have a luck factor without being unfair to the player. Some games are meant to have Gameplay Randomization so you can adapt to it, the game may point that what is coming next is going to be decided on your luck, or a videogame can have elements of gambling. In certain multiplayer games, particularly Party Games, the game being somewhat luck-based can be very helpful; not only does it give a fighting chance to less experienced players (who, in a party-game setting, may be picking up the game for the first time), but it also protects egos by virtue of allowing players to blame their losses on the Random Number God rather than lack of skill. This is why these elements remain prevalent: they may not be truly fair, but they can still make the game more fun.