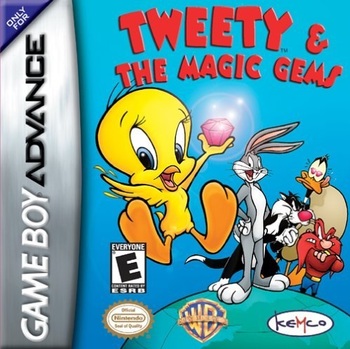 Tweety and the Magic Gems is a Looney Tunes party game released by Kemco in 2001 for the Game Boy Advance, as one of the system's launch titles.

One day, as Tweety wanders through the Deep Dark Woods to escape from Sylvester, he comes across a strange box. When he opens the box, bad forest magic escapes, turning his feet to stone. Suddenly, the Enchanted Queen of the Deep Dark Woods, who is really Granny, finds out about this and summons Bugs Bunny, Daffy Duck, Porky Pig, Sylvester, Yosemite Sam, and Marc Antony to help her break the spell. To do this, the Looney Tunes must travel around the world in search of the five Magic Gems to harness their powers. However, there's a catch; if they don't collect the powers of the five gems before Tweety's entire body turns to stone, Tweety will remain that way forever.

The game is a party game where Bugs, Daffy, Porky, Sylvester, Sam, and Marc travel the world in search of the five Magic Gems to harness their powers before Tweety completely turns to stone. Each character takes turns drawing cards, and the number on the card determines the number of spaces they can move. By landing on red spaces, they can play mini-games in order to earn character points, which they can use to buy items to help them in their quest. Each Magic Gem is hidden in a different city, and by touching them, the Looney Tunes can harness their powers. They can also harness these powers by winning duel mini-games against each other when they have two different colored gems. The game is over either when one player collects all five gems, or when Tweety's body completely turns to stone.