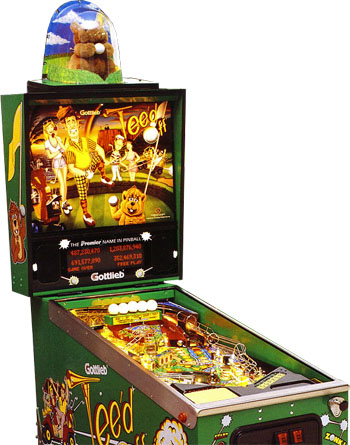 "Bud and Buzz didn't get their own topper!"
Golfer: "I'm getting pretty teed off!"
Gunther: "Temper temper!"
Advertisement:

Tee'd Off is a Physical Pinball Table designed by Ray Tanzer and Jon Norris. It features artwork by Constantino and Jeanine Mitchell and David Moore, and was released by Gottlieb (under the "Premier" label) in 1993.

Taking place on a tropical island, the game casts the player as a golfer spending a day on the links. However, he's badgered by Gunther Gopher, who's out to enjoy himself by distracting the player with a barrage of dances, taunts, and insults. Go through 36 holes around the island and beneath the volcano, Slice through the coconut trees, Hook around the Dog Leg, then try for a Hole-In-One up the center lane. For more points, play the Skins Game, try for the Pitch 'n Putt, and peek into a hole and try to Find the Gopher. Spin the Gopher Wheel to build up the Go-Fore-Par-Tee, then celebrate after nine holes with some Multiball or a Lightning Storm scoring frenzy.

Although Tee'd Off was a modestly successful game for Gottlieb with 3,500 tables sold, it's a rather divisive table among pinheads. Detractors point to its uninspired sounds and cartoonish artwork as turn-offs, and note that it's easy to reap big points by starting multiball and then repeatedly looping the center lane. Supporters embrace its lighthearted theme, family-friendly humor, and undemanding gameplay, while pinball historians note that many of the same ideas would appear in Williams Electronics' No Good Gofers several years later.

Digital versions of Tee'd Off are available from FarSight Studios' Pinball Hall of Fame: The Gottlieb Collection and The Pinball Arcade.

The Tee'd Off pinball demonstrates the following tropes:

Gunther: "Is that a range ballnote Or "rain foil"; it's unclear. you're using?!"