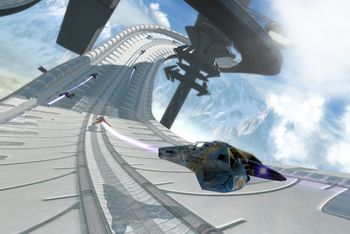 Wipeout (sometimes styled wipEout or wipE'out") is a series of futuristic racing games developed by SCE Studio Liverpool (formerly Psygnosis), widely regarded as the PlayStation's answer to Nintendo's F-Zero series.note Despite it being created in 1995, during the Sequel Gap between the first two F-Zero games - the Nintendo game wouldn't be turned into a series for another three years. Players race anti-gravity craft at speeds of several hundred kilometers per hour (sometimes going faster than the speed of sound), while exchanging weapons fire and attempting to avoid potential elimination (an element introduced in the second game). Visuals, atmosphere and music are three of the hallmarks of the Wipeout series; the first three games were made in cooperation with well-known Sheffield design agency The Designers Republic/tDR,

were announced during PlayStation Experience 2016 and were released on 6 June 2017. Publisher Rogue Games and developer Amuzo would then announce a new game for iOS and Android devices, titled Rush, in 2021.

Also has a page for the teams and individuals of the series.