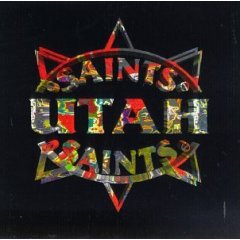 A dance band from Leeds, England comprised of Jez Willis and Tim Garbutt, Utah Saints is best described as a house duo with a rock atmosphere. They're famous for their sampling and vocal manipulation, and pretty much every single they put out charts in the British Isles. The bad part is, well...they haven't made much of their own music. In twenty years, they've only put out two albums. In the rest of that time, they've been doing remixes for everyone from the Stone Roses to Annie Lennox.