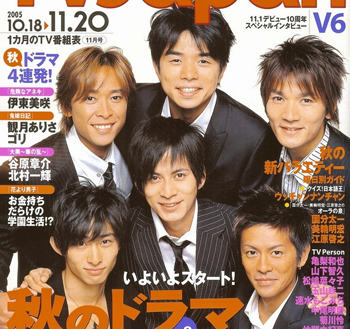 A Japanese idol group formed in 1995 by Johnny's and Associates (also known as Johnny's Jimusho), who brought famous groups such as SMAP, Shounentai, TOKIO, and Hikaru GENJI, they were created as mascots for the Volleyball World Cup. They consist of six members, so their group name is pretty much Exactly What It Says on the Tin (although the V is still ambiguous, even to the members themselves), but unlike other Johnny's groups, they also have two subgroups which have their own releases and separate live concerts; 20th Century (Masayuki Sakamoto, Hiroshi Nagano, Yoshihiko Inohara) and Coming Century (Go Morita, Ken Miyake, Junichi Okada).

As well as having a successful music career, not only as V6 but as 20th Century "Tonisen"/Coming Century "Kamisen", they have also hosted several variety TV shows and acted in many dramas and movies; on top of that, they have also performed in numerous stage plays and live musicals. Most fans in the West generally know them from their single, "Change the World," which was the first opening theme to the anime, Inuyasha, and the tokusatsu series Ultraman Tiga, in which they not only performed the theme song, Hiroshi Nagano played the lead character, Daigo Madoka.