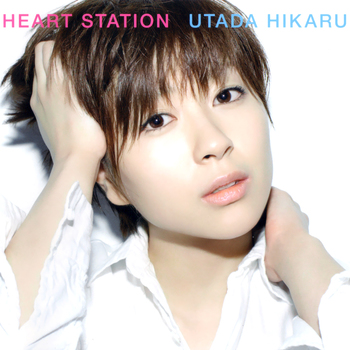 Can you hear me?
Advertisement:

HEART STATION is the 5th Japanese studio album (7th in total) by Hikaru Utada, released in 2008. This album features all of their Japanese singles from after the release of ULTRA BLUE up to 2008, in addition to new material. This was their last Japanese studio album released before their 5-year hiatus from the music industry starting in 2011.

Sonically, the album continues the style of Ultra Blue before it, with a mix of electronic and acoustic pop songs with orchestral elements, but with a calmer atmosphere and fewer uptempo songs. Lyrically, the albums tracks revolve around love and relationships, as well as overcoming difficulties in life. Some of the tracks can be interpreting as relating to their 2007 divorce from their former husband and collaborator, director Kiriya Kazuaki. Utada has stated that their intent with this album was to create something more "simple" lyrically and melodically, that is easier to enjoy for all listeners. they has also described the album as having a more "masculine" feeling than their previous work.

As with most of their work, Utada wrote all the tracks on HEART STATION station themself, and was the primary composer, arranger and producer, with additional production and arrangement work coming from Miyake Akira and Utada's own father Teruzane Utada.

A total of eight singles were released for the album: "Boku wa Kuma" (ぼくはくま, "I'm a Bear"), "Flavor of Life"

HEART STATION was a major success in Japan, becoming Utada's seventh consecutive #1 album on the Japanese charts and selling over 1 million physical copies. It ranked as the #5 best-selling physical album in Japan for 2008, and the top-selling digital album of the year. Additionally, the single "Flavor of Live" became the best-selling digital single in Japanese history, with over 8 million paid downloads.

I'm a Prisoner of Tropes...