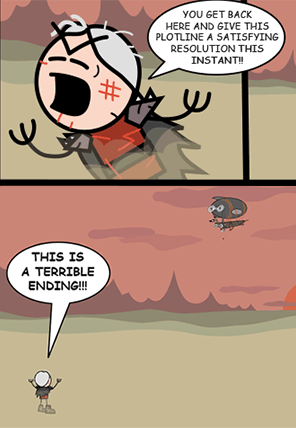 You think there's some pithy comment here? Well, you're—
"There is no real ending. It's just the place where you stop the story."
— Frank Herbert
Advertisement:

You say you want a resolution? Well, you know, we all want to see the end. But when you talk about a conclusion, you know that you can count this work out: a work intentionally ends unresolved, the Story Arcs are unconcluded, and you can believe whatever you want about what happens next.note That's a reference to The Beatles.

When the main plot is resolved but other threads aren't, that's a different trope: Left Hanging. If the story ends right before a big fight scene it's a Bolivian Army Ending. When the lack of ending is passed off as being a good reward, it's A Winner Is You. If the writer ends the story in a way where the viewer or reader must decide by his own interpretation how it ended, it's an Ambiguous Ending. This trope may be combined with Negative Continuity, if the last episode's problems simply disappear. But when a big story arc is dismissed with a handwave, it's an Aborted Arc.

If external factors end the story, it is Cut Short: see Cancellation or Died During Production. If the author's comments about the ending are similarly ambiguous, it's the Shrug of God. Compare End-of-Series Awareness, No Romantic Resolution, Dead Fic (in fanfiction), Offscreen Inertia, The Resolution Will Not Be Identified, Drop the Cow, Endless Game and Non Standard Game Over.

Occasionally the story picks up later with a Remake or Spin-Off. If this is to build tension for a sequel, it's a Cliffhanger. If not, expect a pissed off fanbase, in which case a Continuation Fic may pick up where the official story left off.

As with all Ending Tropes, there will be unmarked spoilers ahead. Consider yourself warned.

Statler: Why didn't they include an ending?
Waldorf: Because it still wouldn't make this page any better.
Both: Doh-ho-ho-ho-ho-ho-ho-ho!