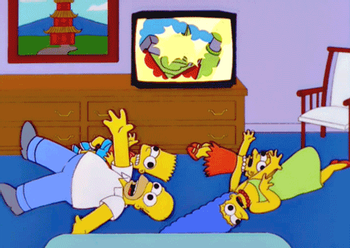 What did you expect from a show named Battling Seizure Robots?
"Ling-Ling isn't here to make friends. Ling-Ling here to destroy all! Give all children seizures!"
— Drawn Together, "Hot Tub"
Advertisement:

It seems that whenever something or someone goes haywire, fails or is about to explode, light is going to flash rapidly, randomly and brightly, whether it originates from buttons, lamps, screens or even eyes and orifices. Justified in failing lightbulbs and warning lamps, but may otherwise lead to moments of failed awesomeness.

Intense flashing effects are generally more common in older works, due to society becoming more concerned about this trope over time. Works which are intended to be disorienting and/or were made for the art are especially prone to this, as are (more contemporary) horror and science fiction genres. Many film and video game creators believe that everything is better with flashing, even though it's not always that awesome. Also contributing to this is that flashing tends to be one of the easiest visual effects to achieve. Older video games in particular often employed flashing screen effects because color-cycling demands so little processing power; since advances in graphic technology have discredited this excuse, toning down flashing lights or patterns that could trigger seizures has become one of the few alterations routinely made to classic games in official emulated re-releases such as on the Virtual Console.

Not in any way related to Epileptic Trees, and only tangentially related to Strobing. Compare to Power Glows, where light produces a positive effect, and Glowing Eyes of Doom, which implies imminent evil rather than imminent (self)destruction. See also Brown Note, Red Alert, Technicolor Death, Stop Motion Lighting, Blinding Camera Flash, and Throat Light. May fall under Sensory Abuse. Subtrope of Sensory Overload. This is a common feature of the Phonýmon trope.

Truth in Television, but only for people with very severe ("photosensitive") epilepsy. Most people with epilepsy can look at flashing lights with impunity and only have to watch out for things that physically affect their brain chemistry (such as acute stress, sleep deprivation, substance use, etc).

It probably goes without saying, but anyone who actually has photosensitive epilepsy or is otherwise harmed by flashing lights should avoid any external links on this page and especially avoid any links to YouTube found here. Don't add video examples to this page, either!