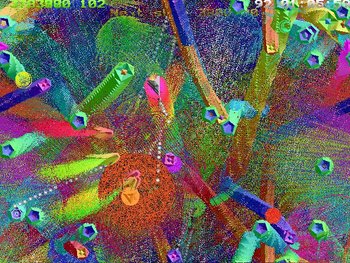 "You're going to be glad very soon that SoC doesn't really vacate from the Asteroids paradigm, because whilst the basic game is in the same world - visually, this has vacated the previous galaxy. This is the anti-asteroids. Whereas [Ed] Logg drew his space pure, flat and black—exquisitely cut with bright white—McLeod gives you all the colours. All at once. And then he cycles them." —review of Spheres of Chaos

is a psychedelic Shoot 'Em Up by Iain McLeod, first released for the Acorn Archimedes in 1992, and later ported to Windows and Linux platforms.

Resembling a cross between Asteroids and an acid trip, Spheres of Chaos is an intense blast-everything game where the objective is to survive wave after wave of increasingly bizarre enemies; not just space rocks, but all manner of weird geometric foes with different behaviors. To deepen the chaos, random things will occasionally teleport in to mess things up, such as black holes, armed pursuit ships, self-replicating daisies, and more.

These days the game is free, and can be downloaded from the official website, or may be available in some Linux package managers.